Once upon an autumn

my Aunt was born by a blood red moon

her eyes were dark and green

Once upon a winter

at the beginning of November

I was born under a meteor shower

my eyes were dark and green

Once upon a nightmare

that you could  have any night

you’ll find my Aunt and Me

We want to hear that our candidates and electeds are willing to reach across the aisle to make things work for our state, for our country. It shows that they are willing to be respectful, reasonable and that they care willing to set aside  personal politics for what is best for the communities they lead.

We as voters should be willing to do the same when casting our votes for candidates to office.

In this election a member of my family- Representative Luis Moscoso  ran for State Senate in Washington  for the First Legislative district. His  challenger was Guy Palumbo who can only be described as a Political Opportunist as opposed to the Democrat that he claims to be.

Guy ran a smear campaign that depicted Luis and our sons as  men who were groomed to beat women because as the message went it was ‘cultural’ ( Luis and our sons are Latino ). You can read my letter about the libelous campaign Palumbo benefited from as it appeared in the Herald  HERE.

One of Guy’s other twisted tactics was to run on Luis’ fine record by claiming to be an expert in the fields Luis has actually worked in and then blasted Luis for not fixing every single problem we face in Olympia on the very same record Guy proudly claimed as his own.

Guy also put forward that Luis outright lied about his degree from the University of Iowa in the Voter’s Guide.

What most people didn’t know was that the person who sent it through to the voter’s guide despite our instructions that it needed to be corrected, was our  consultant.

We  fired that consultant  after the election.

He works for Guy Palumbo now.

Today in the mail I received Palumbo’s flyer- and in it is an outright lie about Palumbo’s ‘expertise’ in transportation: 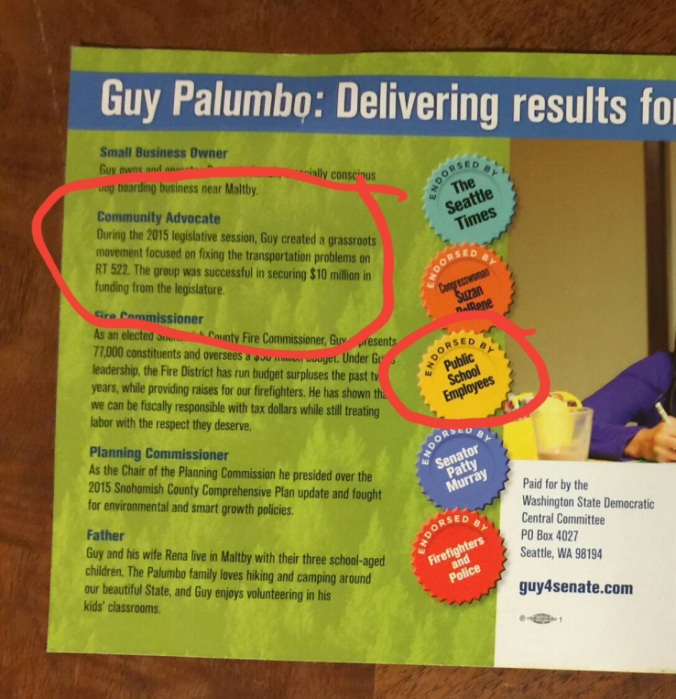 Guy’s letter writing campaign as stated in this ad didn’t secure anything- the bills Luis worked on passing them DID and what should be made clear here is that in no time did  Guy ever contact Luis’ office  (As the Vice Chair for Transportation who lives in Guy’s district that should have been Guy’s first stop in pushing his letter writing campaign AT LEAST). At no time did Guy show up and speak at hearings ( which is something any concerned citizen who is able to attend can do ).

However  credit given where credit is due: Palumbo  did give a presentation on transportation to our Legislative District.

That’s not a problem- the problem is when you imply it was your work or that you played a part in the work when you did not.

In addition, Guy has touted his endorsement by ” Public School Employees”  to further muddy the waters in the hope that voters will think that he as a candidate who was funded by Charter School PAC  money and did not NOT receive an endorsement by the Teachers Union, is somehow endorsed by them now.

Nothing could be further from the truth.

The Public School Employees are a separate body from WEA.

This ad and its falsehoods and half-truths was donated to Guy’s campaign by the Washington State Democratic Central Committee.

This is the party that me and my family have supported. This is the party were Luis served as Secretary and where I  served as President for a women’s political group. We are paid members of the First LD Democrats. On behalf of Democrats in my state- I could not be more ashamed they have played a part in Palumbo’s campaign.

So in this race- and a few others- I am breaking ranks with my party and this is why:

In the past I have been able to rely on my party to help guide me through the voting process. They were a good resource and for the most part they fielded great candidates. Their support of Palumbo, that single endorsement has made it clear to me that they are more concerned with how many seats they can get then they are with character and integrity in the candidates that they support..

As a Democrat  who has held various positions in the party I could not be more concerned with the road they have chosen to take for the likes  of Guy Palumbo- the candidate whose claims to have accomplished things in Olympia already but whose record of that great work can’t be verified.

My guess is because the record he claims to own is not under his name.

Guy Palumbo’s campaign practice of using dog whistles to scare voters to his side is a cheap campaign strategy and Palumbo has mastered its use:

Don’t vote for Luis because all Latino men are culturally inclined to beat women. SO DON’T VOTE FOR HIM LADIES.

Don’t vote for my Republican challenger because Republicans hate LGBTQ. SO COME OVER HERE PROGRESSIVES.

But in the end Guy Palumbo has to play this cheap stunt because the fact is, Palumbo has nothing of substance to offer the voters in this district.

Palumbo’s opponent Mindie Wirth does have character, integrity. She has great respect for ALL of the people she wants to serve.  I would urge voters to consider supporting  her as I firmly believe that she is willing to put the needs of the District above that of her Party and herself.

It’s a great quality and one that is needed now more then ever.